The English Civil War, the American War of Independence and a complete stranger

Lady Strode, brutally murdered either by a soldier or by the hands of a Strode from the Newnham, Devon side of the family who supported the Parliamentarians; the truth is unlikely to be known, but what is known is Lady Strode would not allow Colonel Fairfax or his men to enter Parnham House in Beaminster, Dorset in 1645 and it was this defiance that led to her untimely death. 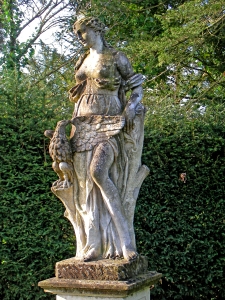 Now just over 370 years later, I was delighted not only to meet a descendant of this feisty Royalist but also take her into the house, indeed, through the very door where her ancestor met her very bloody and violent death.

To say Paula was overwhelmed would probably be an understatement; from the moment we made our way through the electronically controlled gates and drove through the parkland that surrounds Parnham House, I think a final piece of her genealogical inheritance clicked into place.

Fortunately we chose the one and only day of the week when it wasn’t pouring with rain, indeed the sunshine added extra sparkle not just to the “small lake” that sits demurely at the end of the perfectly manicured gardens, but to the private mini tour we were given thanks to Hans, the Treichl’s butler who was more than happy to talk about the décor and ghosts that are known to inhabit this grade 1 listed Tudor mansion. 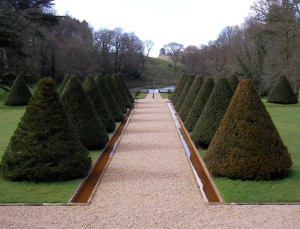 But how did this very unusual and wonderful opportunity arise?

It wasn’t so much a detective story as an online chain-link of events, starting with Paula Appleton who lives in New Mexico and who decided to research her family tree, having discovered she had links with early American settlers who had bought their own ship and sailed across the Atlantic from England.

This is what she discovered about her immigrant forebears:

“A Strode fought in the American Revolutionary War with General and President Washington.  A Strode also fought in the Battle of Monmouth (in Monmouth, New Jersey on the East Coast of the United States).  Also the War of 1812, the American Civil War as well as other battles.  The early arrived Strodes also travelled across the wilderness with Daniel Boone ending up in the State of Kentucky as it was later known.  The Strodes built a fort called Strode Station about 8 miles from the Boone’s fort in Winchester, Kentucky.  The Strodes have an elementary school named after them in Winchester as well as memorial markers in town about Strode’s Station.  The Strodes and Boones are considered two of the first families of Kentucky.”

It sounded like the family had greater than the average fighting spirit!

Anyway, back to the 21st century and how we came to be visiting the fantastic Parnham House; Paula found an article I had written about Parnham for Dorset Life Magazine that was on their online archive site and it was then a simple case of tracking me down via the wonderful world of Google.

So on her way to Italy, she stopped off to take a dip into her past and I was happy to help, any excuse to visit this fabulous house. There was the games room that may have been an ice room at one time, the sitting room where guests would enjoy their pre-dinner drinks, dining room with a walk-in fireplace and grand table to seat 30 guests comfortably. The walls were adorned with magnificent paintings, some harking back to the Treichl’s Scottish ancestry but all of them worthy of hanging in any London gallery.

The gardens were peaceful and we imagined the Tudor gentry strolling along the same paths we now trod. Then there were the vegetable and fruit gardens and flower beds that were alive with the harmonious hum of happy bees who were drawn in by the bright colours of the many different flowers. 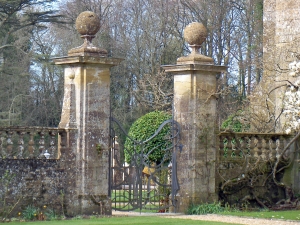 Our tour returned us to our starting place and it was time to depart; Paula and her friend each gave Hans a big hug which he took with good grace – I stuck to the more distant hand shake and we parted company.

Thus through the medium of our online world, I was able to help a complete stranger make an important connection to another time and another continent, but I have a hunch that Lady Strode was keeping a close eye on her American side of the family, just in case there was another civil war in the offing…

“Dear Sophia,  Thank you so much for arranging the visit to Parnham House.  It was beyond my expectations. It was wonderful that you would set up the visit.  I am very grateful to have been able to walk in the footsteps of Sir Richard Strode and Elizabeth Gerard and their son, Sir William Strode Esq, who was born at Parnham.  Living history!!
You will always be welcome to visit New Mexico when you’re visiting the States.”

Freelance Copywriter, Feature Writer and Author. Looking for that illusive job that every working mother craves but surviving, just, on what I can find. My writing and poetry keeps my sane. Watch this space.
View all posts by Sophia Moseley →
This entry was posted in Life's Like That and tagged Beaminster, Cromwell, Dorset, English civil war, Fairfax, Parnham House, Strode. Bookmark the permalink.