The Regent Cinema: the iconic Art Deco cinema in Lyme Regis is no more

How often has that been said to me when I lament the lack of our own home, somewhere that holds special memories; perhaps there are pen marks on a door frame recording growth heights of children, or a bedroom that was once a nursery or a window through which I used to watch my sons at play.

But it’s not is it, not just bricks, mortar, doors, rooms or windows; as we have witnessed today, Tuesday 22 March 2016, when the iconic Lyme Regis Art Deco Regent Cinema opened 11 October 1937 caught fire at around 2pm. Within a few minutes the roof collapsed as the flames engulfed this wonderful old building. Eye witnesses described ‘popping’ sounds like a gun going off or fireworks as the Grade II listed property was consumed by the flames until it was destroyed a couple hours later.

There has been a huge outpouring of emotion that not only demonstrates how people have been affected by its demise but it also proves bricks and mortar are so much more than just building materials.

When the Regent Cinema was built on the site of Bow House Hotel and architect Mr W H Watkins of Bristol was employed by the Hardys, they wanted to provide their customers with something very special commensurate with the high regard they had for their clientele. 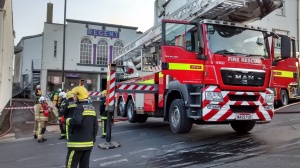 The roof has collapsed

And it was the elegant sophisticated simplicity of the 1930s that was soon welcoming the throngs of dedicated cinema goers.

Now, some 80 years later, whilst the audience numbers have dwindled, those who patronise it or even those who simply admire its Art Deco splendour have been left feeling bereft and grieve for a loss that can never be returned.

You need only listen to local opinion; at the Tesco Metro check-out I overheard a customer recalling his childhood days of enjoying the Saturday film and the lady behind the counter reminisced about her trips to the ‘picture house’ .

The press release from Scott Cinemas states they believe it was an electrical fault that caused the fire but reassuringly add:

“However, we are fully confident that this loss of the cinema facility will be temporary and that the Regent will be rebuilt to its former glory. As a listed building it was insured with this requirement in mind”

So yes, it is only bricks and mortar, but there’s a whole lot more to a building than what it’s made from and I think we will all look forward to this phoenix rising from its ashes. 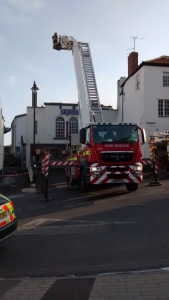 A history of the cinema http://www.lymefilm.org.uk/html/cinema_history.html

Freelance Copywriter, Feature Writer and Author. Looking for that illusive job that every working mother craves but surviving, just, on what I can find. My writing and poetry keeps my sane. Watch this space.
View all posts by Sophia Moseley →
This entry was posted in Entertainment and tagged art deco, Lyme Regis, Regent Cinema, Scotts Cinema. Bookmark the permalink.