We’re two thirds of our way through Lucy’s #treefollowing blog year which means my tree has reached a horticultural milestone. Why? You may well ask; and I will tell you.

After a somewhat, for royalty (it’s a Royal Gala), ignominious start in life, having lived in a small pot designed for a geranium at best for his first 10 years and been carted around due to our many house moves, I decided it was time to release our apple sapling from his pot-bound life and plant him alongside his much bigger distant relatives at the bottom of our current garden. That was exactly one year ago.

So after a year of being in yet another temporary rented property (and yes, we will have to dig him up and transport him when we move again); he has withstood the rigours of the extreme weather conditions due to climate change that we are all now coming to accept and, notwithstanding the leaf mould I shall sort out in the spring, the nibbling insects whom I will also sort out when they appear next year, our apple sapling has made it through his first year of being a proper tree planted out in a large garden, as opposed to an apple tree masquerading as a geranium in a very small plant pot outside our back door! 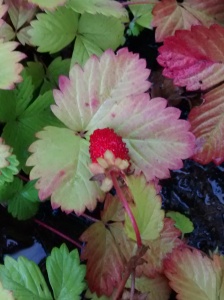 A bright red strawberry growing amongst the autumn leaves.

But I wonder if, as we humans have revelled in our artificially glorious summer this year that has likely only come about due to our own manmade activities, will the contrived protection I gave our sapling, albeit the simple shelter of outside walls; leave him wanting, and perhaps less able to cope with the extremes to which he will now be exposed.

Our extended summer seems finally to be petering out and we are being subject to a considerable battering by high winds and rain, so I wonder if my juvenile tree, that has hopefully found his feet, or rather roots in terra firma, will brave the storm and stand firm in his autumn leafless twiggy one-year-old-cum-11-year-old state. 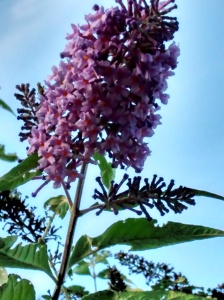 A new buddleia flower blooming in the late summer

Of course if it snows this year (and I have a hunch it’s going to be a very white and deep winter, so place your bets now) then I hope he will not pine for his pot that stood in the shelter of our various back doors for so many years, but stands up to the climate change we humans have created and says “you know what, I may be small but I have learned a lot in my little geranium pot and now I’m going to help make a difference”.

I similarly hope my son, for whom this tree means so much, will also step up to the plate when the time comes and be both strong and resilient because of, and not in spite of the environment he faces due to the actions of others. 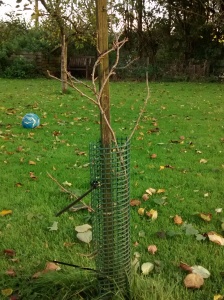 I may only be small but I’m feisty

Freelance Copywriter, Feature Writer and Author. Looking for that illusive job that every working mother craves but surviving, just, on what I can find. My writing and poetry keeps my sane. Watch this space.
View all posts by Sophia Moseley →
This entry was posted in Tree Following and tagged apple sapling, apple tree, climate change, Royal Gala, sapling, summer. Bookmark the permalink.