I last saw the Shanty Theatre Company perform The Rime of the Ancient Mariner, so I was hopeful The Story Giant would be a worthwhile performance.

And in my continuing per pro pursuit to promote the art of live performance to my sons, I booked the tickets post haste and ensured we were at the theatre early enough to secure front row seats.

(It just so happens we didn’t need to worry about seating as, surprisingly, the audience was not huge).

One of the aspects I enjoy of this particular theatre group is the way they involve the audience to make them feel they are not only important spectators, but that they also play a crucial role in the success of the performance. It can be slightly unnerving for the uninitiated but this method of embracing and animating with onlookers is a clever strategy to pull the spectators into the story.

Eyes front but stage behind…as a member of the cast who had secreted themselves discretely amongst the audience, stood up and started to read from a book with the aid of a small torch (just as a child might after ‘lights-out’). Then another performer elsewhere within the audience did the same.

I wonder, how adept is your imagination in removing you from your present place and putting you somewhere completely different?

With the Shanty Theatre company you cannot help but be transported to their world of fiction and fantasy. From the word go they have bucketsful of excited voices, clear description and volume so you are scooped up and carried along in the current of their graphic depictions.

The story has a touch of Enid Blyton-esque inasmuch as there are four children and high adventure with some danger thrown in, but it also has an adult moral compass that they have to follow right through to the very end of the performance.

The ‘children’ are required to find the final story for the giant who has heard every single story going; and they each trawl through their memories for the stories they know to see if it is the one the giant is looking for.

There is a diverse mix of culture, accents and themes as the characters tell their tales, only once using additional face make-up to add to the theatrical effect they generate from their elaborate portrayal of a story within a story.

Their talent also extends to musical instruments; at first I thought it was a ‘canned’ musical accompaniment, but when they started to play guitars, violins and French horn (!) I soon realised I was wrong and I have to say it added yet another new dimension to this company’s flare.

Now have you ever been put ‘under the spotlight’ unexpectedly and floundered like a fish out of water as you search for the right thing to say without looking foolish? But then you realise it was done in an abstract non-specific way that was not necessarily directed at you personally.

Well that happens in this play and it happened to me!  Radhika Aggarwal was

reminiscing about India and looking out at the audience, asked if she knew me and had she met me before. Now should I answer or not? Was she actually talking to me directly or not? It’s a difficult one, but in the end I mouthed “no” we did not know one another.

My sons thought this hilarious as they watched my befuddled face!

The giant portrayed a person who has become weighted down with the frustration of trying to make people around him understand what they need to do. The answer is staring them in the face but they can’t see it because they are making the search more complicated than needs be (sound familiar?).

He lumbers about the stage with an uncomfortable gait; it must take hours of practice to perfect the elephantine stomping when you have stilts tied to your legs!

So in the end, when it seems all is lost and the story giant is dying before their eyes, the four children suddenly realise what it is they have to do… 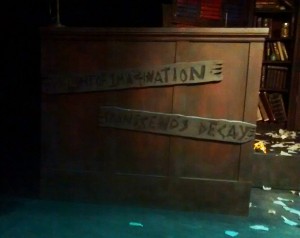 …the light of imagination transcends decay’.

So once again I can recommend this performance of The Story Giant and here is the link to book tickets http://www.marinetheatre.com/shanty-theatre-company-presents-the-story-giant-based-on-the-book-by-brian-patten-friday-25th-july-sunday-10th-august-thursday-21st-august-thursday-28th-august/

PS My son noticed and wondered why they still had their gleaming disco ball (if you read my post on the Ancient Mariner this will make sense!), so it seems I may be winning the battle to encourage a love of the theatre after all…on with the show!

Freelance Copywriter, Feature Writer and Author. Looking for that illusive job that every working mother craves but surviving, just, on what I can find. My writing and poetry keeps my sane. Watch this space.
View all posts by Sophia Moseley →
This entry was posted in Entertainment and tagged acting, actors, Brian Patten, Dorset, Harry Long, marine theatre lyme regis, night out, performance, shanty theatre company, stage, Stu Mcloughlin, the Story Giant, theatre. Bookmark the permalink.