After much heated debate and anguished discussion, I finally got my fix of real culture with a trip to Malaga’s Alacazaba and Gibralfaro castles.

The available tourists’ literature was scant and anything of the original structure that remained was heavily reinforced and any missing bits had been infilled by modern repairs; as the walls were made from limestone that has a habit of disintegrating over time. But the two castles combined to make an interesting foray into a small segment of Spain’s history.

As with many European countries, there was a reminder of Roman occupation in the shape of an amphitheatre. It looked like it had been cut in half to allow the road to run through and over 50% of it was missing which was rather sad, but I guess when the city was developing during General Francisco Franko’s rule, as he had no interest in democracy, he probably cared very little about the city’s history. 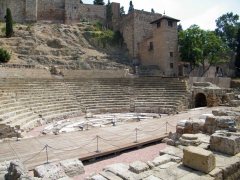 Anyway, with the remaining ‘tunnel’ and rows of seats, I could imagine the gladiators, prisoners and animals emerging from the relative safety of the underground waiting area, into the glaring daytime sun to face a certain death.

Whilst we were imagining the best in Roman entertainment, there was some more modern Spanish entertainment going on opposite. It was Malaga’s fiesta week with plenty going on from noon until the early hours and everyone was enjoying a mixture of live music and dancing, some of it in the traditional Flamenco style.

There is something rather magical in the ruffled hem and lace of a senorita’s gaily coloured dress, a tassled shawl around her shoulders and her hair tied back with a fancy comb and bright flower. There were a few toreados who looked equally handsome with their cleanly cut black jackets in their traje de luces. The streets were still relatively empty but there was already something of a carnival atmosphere in the air.

We moved onto the first of the two castles; the Alacazaba. It was made up of many arches and walkways that lead to gardens and brick gazebos, so it was more like an elaborate arboretum than a castle. There were some interesting artefacts on display and the original features that remained included a grape crushing bath (for wine making) and ornate window decoration.

We were all roasting by now in the hot Spanish sun, so stopped for an ice-cream and drink before wending our way up the road to the Gibralfaro castle.

Now, having learned an expensive lesson from our Gibraltar trip, I asked the man at the information kiosk if the route to the castle was achievable by foot given the temperature. He assured me that much of it was in shade so it was easily done. Clearly he had not attempted it himself.

The route was along a cobbled road that wound its way up the hill at about a 40 degree angle and there was no shelter other than a few scrappy trees that hung in pathetic exhaustion at the side of the road!

But I was determined to reach the top and reach the top we did (I won’t bore you with the detail of the objections raised by certain family members!).

Fatigued, melting and somewhat red in the face, we luxuriated in the delight of a cold bottle of water each bought from a kiosk at the top of the hill.

The Gibralfaro castle was pretty much made up of ramparts with paths between. There was a small museum telling a little bit about the history of the area, sadly all in Spanish, but there was enough to look at to make it interesting.

However it was the view from each corner that made the sweaty route march worth the effort. You can see the whole of Malaga city on one side, the Mediterranean Sea and Malaga Port on the other and the Sierra Nevada mountains. Quite spectacular!

I couldn’t help but notice the rather large bull ring that evidently took pride of place judging by its size and appearance and rather like the Roman soldiers, prisoners and

animals, the large brooding guest of the bull ring sadly has but one fate awaiting it as it too emerges from the relative safety of its underground enclosure.

Malaga is indeed a vibrant and colourful city and I would certainly make a return visit given the opportunity. ‘¡Olé!

Freelance Copywriter, Feature Writer and Author. Looking for that illusive job that every working mother craves but surviving, just, on what I can find. My writing and poetry keeps my sane. Watch this space.
View all posts by Sophia Moseley →
This entry was posted in Holidays & trips away and tagged Alacazaba, bull ring, castle, Festival, fiesta, flamenco, Gibralfaro, gladiator, Malaga, Roman, Rome, Sierra Nevada Mountains, Spain, toreador. Bookmark the permalink.